And the Secret to Taking Your Success to the Next Level

As we see it, there are three categories, or groups, of people in our industry. Somebody who…

The question is how.

How can you continue to grow a highly profitable – and highly successful – membership site no matter what group you’re in?

The good news is that there are proven strategies and stories that demonstrate how people are doing it in all of these buckets —and we love sharing about them!

People in this bucket are in the early stages of growing a membership site. (And maybe that’s you!)

You want to do it, but don’t necessarily have an audience yet.

While some people think that it takes thousands or tens of thousands of people in an audience to to establish a successful membership site, our TRIBE community has proven that idea completely wrong.

Take Anna Saucier. She attended our TRIBE Live event and was so inspired by everyone’s stories that she made a promise to herself.

She said, “You know what? I’m going to launch my membership before I leave this conference.“

She did not have a site established. She did not have a big build up or huge marketing campaign, but she went for it anyway. She made a post on Facebook to her audience of just a few hundred people, and she said, “This is what I’m thinking about doing. If it’s of interest, send me a direct message.”

Before she knew it, friends were messaging her and within 24 hours, she generated over $5,000 in revenue—from the launch of a membership site that wasn’t even created yet.

Here’s the thing… We see stories like this all the time. And we’re here to affirm: you have more potential than you even know!

There are people out there right now who need the solutions, the content, and the community only YOU can provide. All you have to do is take the first step.

Whether you’re a speaker, an author, a blogger, a podcaster, or a YouTuber, think of the membership site as an extension of that which gives you the ability to go deeper.

We have so many great examples.

Anna DeGilio had been helping first and second grade teachers for years by selling one-off lesson plans. But let’s face it. Teachers don’t need one lesson plan. They need one for every single day of the school year.

So instead, she established a membership, and in a very short period has grown it to over 2,500 members. She is helping thousands and thousands of teachers, students, and parents through her membership.

In fact, in a little less than a year and a half, Anna completely revolutionized her business and the way she serves her audience.

And then there’s our friend, Scott Paley. He teamed up with Joan Garry, an established expert in the non-profit space, to help others grow their own non-profit ventures.

In under a year, he took a small, established audience and added over 2,500 members to their membership site.

It’s just an amazing example of what can be done when you already have an established audience.

Will we be telling your story next? 🙂

Check out just a few of our clients’ amazing stories…

Jennifer Allwood made one business tweak and exploded from 700 members in three years to adding 2,500 more in a single year!

In fact, she made more members in a single promo than in the entire three years of building her membership site.

Gabby Bernstein had a membership site for quite a while—with over 1,100 members. After just a couple changes, her very next promotion added 4,100 new members!

Levi Kujala had an established guitar membership site and was doing well. He was earning about $300,000 a year, but had plateaued and wasn’t getting beyond that mark.

Well, again, a couple of restructuring things on the marketing side as well as on the retention side, and everything took off.

His membership income went from $300,000 a year to multiple millions of dollars a year in the guitar space.

One of the Greatest Business Models

Growing a membership site is one of the greatest business models of all time because it helps you establish recurring revenue, which helps create stability.

But beyond that, there’s the trickle down effect, the impact that you are having with the people that you get to serve. And that’s truly the best part.

So, no matter whether you are in the early stages and are thinking about launching a new membership site, or you already have an established membership site and now you want to take it to the next level, we want you to know something…

This is not a one-and-done operation—and that’s the best part. You get to tweak your membership and make it better as you go.

No matter where you are now, you can steadily improve by focusing on the people in your membership audience and doing the few strategic things that are going to make the biggest difference.

Thinking about a membership site? Get started today!

Whether you’re starting from scratch or looking to take your site to the next level, this free guide is an incredible resource. And you can get it for FREE. 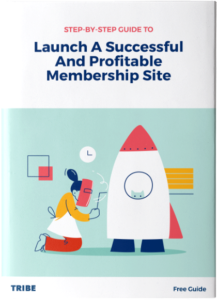 How to Name Your Membership Site: 3 Simple Rules to Follow